In April of 2017, Wilson officially launched its Reconciliation Action Plan (RAP). Developed in line with the parameters set by Reconciliation Australia, the RAP aims to transform the way our company interacts with the traditional owners of this land, enhancing our relationship with Aboriginal and Torres Strait Islander communities around the country.

For a company as large as Wilson to undertake a task as expansive as reconciliation required extensive planning and the involvement of people at every level of the company. The RAP represents a formal commitment on the part of Wilson to contributing to closing the gap between Aboriginal and Torres Strait Islander peoples and non-Indigenous Australia. We aim to empower First Australians through developing partnerships with communities and Indigenous-owned businesses, investing in sustainability to the benefit of our First Australian partner businesses and educating our own staff to create more welcoming, culturally aware workplaces.

With the launch of the RAP, Wilson joins a community of more than 650 organisations including highly respected names such as KPMG, Rio Tinto and the Australian Government Department of Human Services. Our hope is that the implementation of the RAP will set an example to other companies looking to deepen their relationships with First Australians.

To ensure that the Reconciliation Action Plan is constantly being steered in the right direction, Wilson drew on our own deep well of experience with the Aboriginal and Torres Strait Islander communities. Since 2014, Mr Edwin ‘Jim’ Mi Mi – himself a member of the Queensland Wakka Wakka tribe from Gayndah, South East Queensland – has served as Wilson Security’s National Indigenous Engagement Manager. He’s taken a significant role in the implementation of the RAP, leveraging his extensive experience engaging with cultural clans across Australia in areas where Wilson operates to forge stronger, deeper connections between our company and the local community.

One of the most significant contributions to the RAP came through Mr Mi Mi’s family connections. His aunt, Hazel Cowburn, is responsible for the creation of the artwork commissioned by Wilson as part of meeting our obligations under Recognition Australia. Titled Spiritual Journey of Unity, it portrays her vision of the metaphorical journey of reconciliation that Wilson has taken as seen from the air. The artwork has been adapted for the livery of the Wilson V8 Supercar, and traditional owners with whom Wilson had previously worked as part of a mine site tender were invited as guests to the car’s first race. The event was a massive success, with the car being blessed in the pit prior to the race, and the race team already excited to welcome them back next year to present a whole new livery. 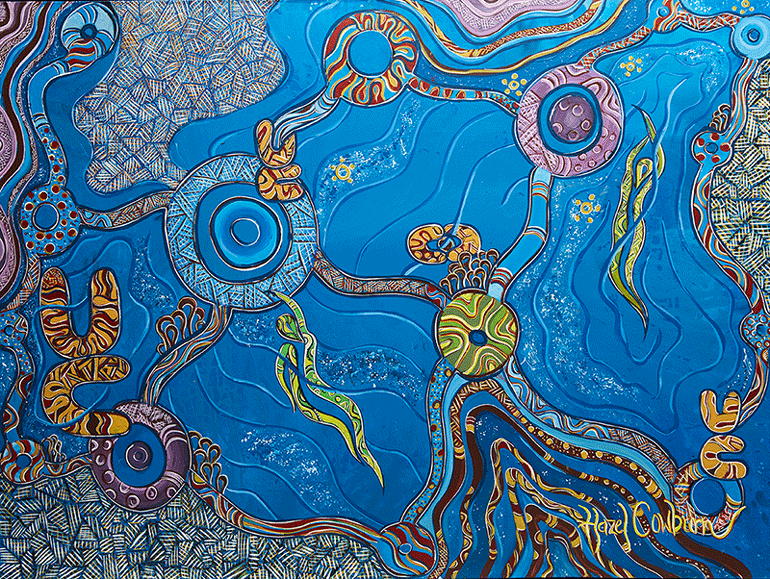 Implementation of the RAP at the local level is the responsibility of ‘Champions’ – representatives from each state who have volunteered to be a vital link in the chain between the Working Group and local company representatives. The role of the Champions is to push forward the RAP on a day-to-day basis, coming to every project with reconciliation first and foremost in their mind. Every time they speak to a representative of an Aboriginal or Torres Strait Islander community, every time they go to tender and every time they communicate with the broader public, they should be thinking about reconciliation.

On the road to greater things

The Reconciliation Action Plan has already seen great strides being made across the board in education and community partnership. We’ve begun to build strong relationships with Indigenous businesses across the country, with great strides especially made in far north Queensland. Working with respected organisations such as Supply Nation, we’re looking forward to involving more Indigenous businesses in our supply chain, allowing us to both extend our service offering when we go to tender while providing crucial employment opportunities to Aboriginal and Torres Strait Islander peoples.

This is only the beginning for Wilson and our Recognition Action Plan. Recognition Australia defines multiple different levels of RAP; Wilson is currently working on meeting the commitments of the ‘Innovate’ level – the second of four. While a final report is required upon completion of the RAP in April of 2019, our goal is to continuously work toward to the betterment of Aboriginal and Torres Strait Islander peoples within our organisation, across our partner network and in the communities in which we serve and operate. Currently, we want to set ourselves up for success so we can move on to greater and more involved Recognition Action Plans, allowing us to continue provide employment opportunities to First Australians everywhere.

"With the launch of the RAP, Wilson joins a community of more than 650 organisations."